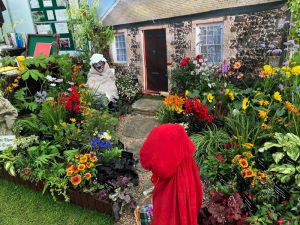 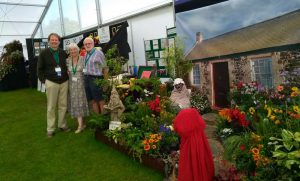 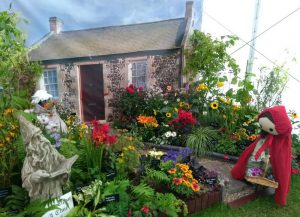 The theme was ‘Once Upon a Time’

“Once upon a time.” Where do we start? The theme lends itself to a fairy tale but which one, Jack & the Beanstalk, Sleeping Beauty? In the end we decided on Little Red Riding Hood. Besides plants, of course what will we need? A cottage, Red Riding Hood, the Wolf and a story teller.

The cottage we already had; Irene & Margaret felt they could conjure up figures of the Wolf and Red Riding Hood. George again came up trumps by supplying a wizard to tell the story of Little Red Riding Hood.

Plants were a concern. Ideally we would have liked to have a preponderance of red flowers to tie in with the subject. However, difficulties caused by the cold spring and exacerbated by the recent hot dry weather made sourcing a sufficient quantity and variety of red flowers impossible. Therefore we settled for a range of bright colours in keeping with the fairy tale feel and also keeping to the spirit of cottage gardens. Once again the path was designed by the past master and path master Geoff. He has been able to produce paths using a variety of different materials for each of our past Southport gardens.

Once the hard landscaping was installed the time-consuming arranging of plants was meticulously carried out by Mary and Sandie, assisted by Tina, George, Geoff, Keith and Peter also assisted where possible.  Last minute jobs included final tweaking of the plants, labelling of the plants, erection of the display boards and arrangement of recruitment material on the tables.

Was it worth it?  The judges certainly thought so; they awarded us a LARGE GOLD MEDAL.  Also, very pleasing was the large number of favourable comments from visitors.

We use cookies on our website to give you the most relevant experience by remembering your preferences and repeat visits. By clicking “Accept All”, you consent to the use of ALL the cookies. However, you may visit "Cookie Settings" to provide a controlled consent.
Cookie SettingsAccept All
Manage consent

This website uses cookies to improve your experience while you navigate through the website. Out of these, the cookies that are categorized as necessary are stored on your browser as they are essential for the working of basic functionalities of the website. We also use third-party cookies that help us analyze and understand how you use this website. These cookies will be stored in your browser only with your consent. You also have the option to opt-out of these cookies. But opting out of some of these cookies may affect your browsing experience.
Necessary Always Enabled
Necessary cookies are absolutely essential for the website to function properly. These cookies ensure basic functionalities and security features of the website, anonymously.
Functional
Functional cookies help to perform certain functionalities like sharing the content of the website on social media platforms, collect feedbacks, and other third-party features.
Performance
Performance cookies are used to understand and analyze the key performance indexes of the website which helps in delivering a better user experience for the visitors.
Analytics
Analytical cookies are used to understand how visitors interact with the website. These cookies help provide information on metrics the number of visitors, bounce rate, traffic source, etc.
Advertisement
Advertisement cookies are used to provide visitors with relevant ads and marketing campaigns. These cookies track visitors across websites and collect information to provide customized ads.
Others
Other uncategorized cookies are those that are being analyzed and have not been classified into a category as yet.
SAVE & ACCEPT